The stories told by immigrant crossings and militarized territories suffuse and define the sovereign contradictions of modern nation-states. Security and fear defines such borderlines. The borderlands(lines) – both corporeal and territorial, become the rite-of-passage for the struggling immigrant and the employment opportunity for the American poor.

A physical, psychological, and political barrier – the Texas-Mexico border wall now extends over 370 miles throughout the U.S., passing and disrupting many diverse communities, including indigenous peoples of Texas, New Mexico, Arizona, and California. One of these communities is the Nde’ or Lipan Apache people, many of whom reside in Gokiyaa, the original land of Ndeh/Ndee/Nde’ people extending from South Texas to Arizona.

Very few people have had the opportunity to witness the fear instituted by the border wall and the United States military. In a delegation organized by Lipan Apache leaders in conjunction with the University of Texas at Austin, Indigenous Xicana artist Monica Villareal was able to witness how Nde’ people now live subject to fear and militarization in their homelands. I had the opportunity to converse with Monica on her project and her impressions living in the community for a few days. 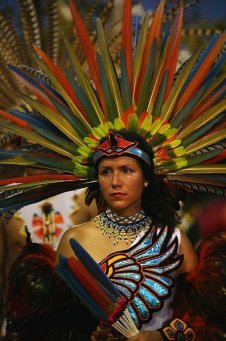 Roberto: Hi Monica, can you tell us more about your “Border Lines” project?

Monica: Currently, I am a resident’s artist for Voices Breaking Boundaries, a full year responsibility where I have worked, particularly on the Borderlines Production Project. In the past, we have developed a series of events. The first one was in October of 2013 and it was based on the borders built over urban neighborhoods in Houston, Texas. On this project, I used my art to speak over the history of police brutality. I used the example of the famous case Jose Campos Torres case, a Chicano man that was assaulted here in Houston, Texas.

The second was in December of 2013. The goal of this project was to create “invisible borders” where some people were able to pass and others were not. Artists were positioned at each check-point and acted out a performance piece. I decided to embody a Chola  from that particular Barrio. Changing roles, you know?

The third one was called “Crossing the Line.” I dedicated my piece to the Lipan Apache Women Defense focusing on the issues going on at the Texas-Mexico border in South Texas. With this project, I wanted to make sure people not living in the border to realize the militarization that is going on with the wall being up there. I particularly focused on using art to bring awareness about the fear one feels in the Texas-Mexico border region.

Roberto: I noticed that in your project you were interested in using physical representations of militarization. Particularly, what do the guns represent?

Monica: The gun that I used is M-16. It is manufactured, created, and designed by the U.S. government. This is a weapon of war but walking through the area you can see military carrying it around as if the region is in an actual state of war. I felt that was the gun that would represent the type of militarization the U.S. does and the kinds of weapons they use to do it. The gun is made out of steel and so are the walls in South Texas. This is what brought my idea together.

So when I was invited to visit the Lipan community in El Calaboz, Texas – Margo Tamez [Nde’ scholar, poet, human rights advocate] introduced to the wall and the issues present there, I was able to finally experience such fear.

I experienced the border patrol going through there with their guns and driving by whenever they wanted to. The night I stayed there I woke up in the middle of the night with fear. I felt that at any point the border patrol could ram into door and act as if someone sneaked in from across the border arresting and harassing us. You can feel the presence of authority around there. You can feel the lost of liberties. I just felt that way. By being there and feeling that, this idea sprung. What I really wanted to convey to the public and what I wanted to communicate was that feeling that I felt when I was there – the feeling of fear. Giving the audience that in your face feeling.

Roberto: I often see the word militarization used quite vastly by many organizations – indigenous and immigration alike. It sort of seems like the word cannot transfer what one feels when military occupies our territories. It also seems as if you are saying militarization has a practical implication in the way people live and inhabit a space. As an artist, how does militarization actually look like? What do we mean when we say “militarization”?

Monica: In the past, I have never really used that word. I also know there are very little people exposed by the border wall. People don’t really understand the fear you get when you see it, when you actually feel it. It is so high and is a towering on top of you. Not only does the presence of the wall make you feel like you’re in prison but also everything that comes with it – the cameras, the border patrols and the guns they carry, the mandatory monitoring at night, while people live. I witness border patrols going into some people’s property without even consulting them, it is a feeling of militarization where people feel they have lost certain rights.They can be physically abusive, mentally abusive to you and there is nothing you can’t really do to prove that this is unjust.

Roberto: You seem to focus on an international approach to border militarization. As you might know, this kinds of politics are not only happening in Lipan Apache homelands but is a trend occurring in many places throughout world. We are at the age of influx, bodily and material, and it seems that as this same process is acutely developing in places where third world country borders and leaks into the first. What is at stake – for artists, intellectuals, and activists – when we try to bridge these similar processes and experiences and begin a truthful conversation regarding sovereignty and militarization?

Monica: It is very important to me that my art be interpreted internationally. What is happening here at these borders is also happening around the world. It’s sad to know that babies are born into this type of environment and ultimately grow up feeling desensitized. This isn’t an honorable way to living, it’s actually not human. So it’s really important for me as an artists to create art that could be understood world wide. When speaking about my most recent art instillation I utilized certain text that said: “stopped militarization of indigenous lands”, I refers to all indigenous lands even in India, Bangladesh, Palestine, etc.

Roberto: As you might know, the immigration bill proposed this year was not only about immigration but the majority of it regarded security as the most important aspect. I think it is important at this particular moment that immigration is such an important trend in the world, particularly in the neoliberalizaiton and globalization of life, that we pay attention to the relationship between indigenous peoples and immigrants. Since you and many others are positioned in the middle, as both immigrants and indigenous, how can our conversations be bridged between these two not so distinct groups? What are the ways in which you as an artist can connect these issues that are extremely related but often times don’t get related? Is there a space to talk about indigenous peoples in just in North America living in the border but also the millions of indigenous immigrations coming from Mexico, central and south America that often don’t get included in the immigration or the Native American human rights discussion?

Monica: Coming from a Xicana Indigenous perspective, I identify with my ancestral indigenous roots…although I don’t know all of them. Since I am a first-generation and my parents came from Mexico, coming here to work – although, my grandparents with my father’s side were born here. Even though I am a first generation. And even though we both had to assimilate, we have had a long past in these lands and it goes to show of the traveling that happens on these lands even before and after these US-Mexico border existed. There are many stories between these land, trading and natural flow of migration, trading of riches between communities north and south.

Now, a government to which many of us don’t agree with is perpetually stealing our rights by fiercely controlling these lands. It persecutes, incarcerates, and threatens the way of life for many of our relatives – whether they classify as indigenous or Mexicanos or immigrants from other countries. It is all part of an unjustified behavior. People that come and contribute to the community would love to visit families and come back to continue working. If it wasn’t for this walls, we could create this rich way of doing trading and commerce that does not involve fear. The reason that I say that is because there is a sense of control around the border. Many of us know the reason why it is there why the U.S. needs control of this borders. Not just here, but also in the Middle East and in the Israel-Palestine border. Again we go into the topic of connecting these borders and understanding that no matter if you are indigenous, “Mexican”, or Palestine all these issues are well connected. Many people can identify with the indigenous struggle.

Both struggles are very similar: “we didn’t cross the borders, the border crossed us.” What is really crazy is that this border wall that we have here is that this wall we have here is about 50 kilometers from the border. The creation of these walls is totally subjected; they try to put a dangerous line through an invisible land, the so-called “U.S.” land. That does not sound right, no matter how you put it.

“We Didn’t Cross the Border, the Border Crossed Us” by Monica Villarreal

The most enraging thing about this wall is that is not in the actual international border. When I walked through there are wide gaps in between the walls. I didn’t even want to walk to other side because I thought I was not obeying to certain laws. As Margo walked and crossed to the other side, I found out it was still U.S. soil. It was still US property. They create border anywhere they want. Just to imagine that this huge thing going into the middle of your property disturbing your space and your peace, this outwardly outrageous!

My passion as an artist is to make people feel curious about this issue. But I also want to talk about hope. Something that brought hope to me was when Margo Tamez communicated to me that this is not just a Lipan Apache issue, but this is a border issue happening with millions of communities in the border. They are already beginning to create a dialogue amongst each other. It is creating a unity, necessary in the past and growing into something bigger, possibly into a movement. I really wanted to send that message and the kind of work that they are doing. This piece is just the beginning into something bigger, I can already see indigenous and immigrant working together to fight this wall. Not one more inch.